The Hoosier Ticket Project is a 501(c)(3) nonprofit that wants to remove financial barriers preventing fans from attending Indiana University athletic events in person by leveraging the generosity of alumni and fans. Through ticket donations and financial gifts, the Hoosier Ticket Project provides tickets to individuals and families, helps the athletic department increase attendance, and gives Hoosier student-athletes the best home-crowd environment possible. The project was founded by a group of loyal Hoosier fans as a way of giving back to the university that has given so much to them. 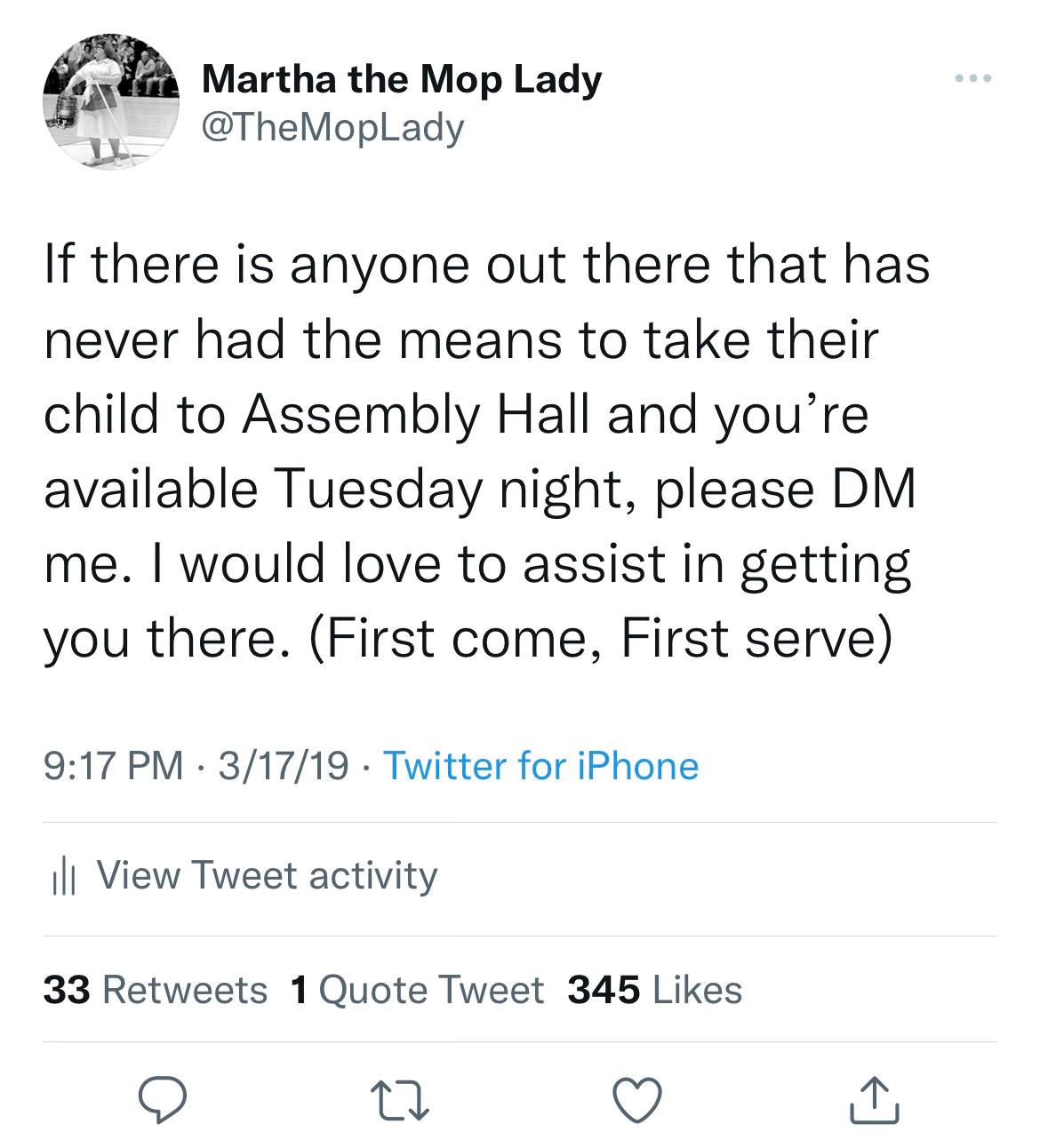 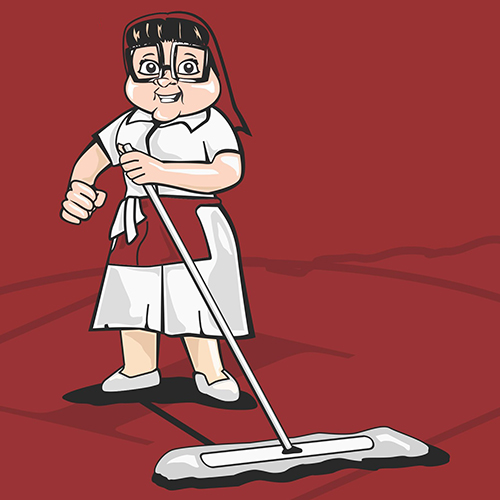 An iconic figure in Indiana basketball lore, Martha has been keeping the halls of Assembly Hall clean while belting out "Indiana, Our Indiana" since the 1970s.

Recently, she had an idea about how to give back to an institution that has given her so much. By matching donated tickets with fans who wanted to treat a child, family member, or friend to the fun and excitement of their first Indiana University athletic event, she could impact the lives of numerous youth and first-timers while packing the stands for the student-athletes.

Little did she know how popular her idea would be. Through the incredible generosity of IU alumni and fans, she was sending more and more fans to every game. Since more fans means more cleaning, she decided to ask for help. After recruiting three life-long, dedicated Hoosiers to run her ticket project, Martha has returned to keeping Assembly Hall spotless for its new guests. 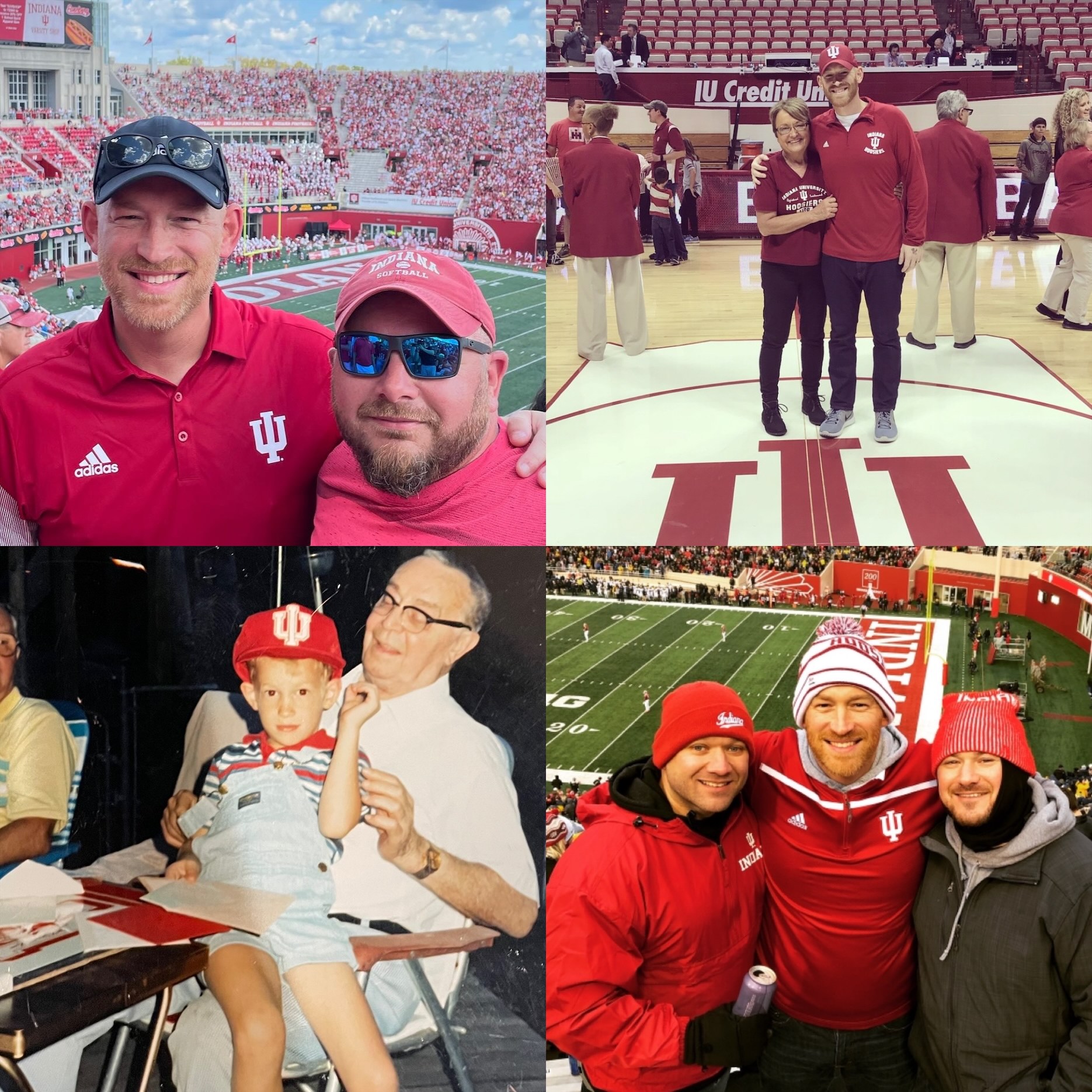 Hoosier born and bred, Josh bleeds cream and crimson. His earliest memories of being a Hoosier are the times he spent watching basketball games and idolizing Calbert Cheaney with his grandfather in the early 1990s and sitting inside Memorial Stadium in awe of Antwaan Randle El.

The Northeast Indiana native currently resides in Fort Wayne with his 8-year-old daughter. He is a regional sales manager for Bonnell Aluminum and working toward another Indiana University degree through its continuing education program. In his spare time, he can be found coaching his daughter’s softball and basketball teams.

For Josh, being a Hoosier has always meant family. Whether it was watching games with his grandpa, traveling with his mom on their annual trip to Assembly Hall, or fall tailgates in Bloomington with his closest friends, many of his favorite family memories are associated with Indiana University. Now he is working to instill the same Cream & Crimson passion into his daughter.

His memory of walking into Assembly Hall for the very first time is something he will never forget, and now his goal is to give children and families across the state of Indiana that same memory. Giving back to a place that has given Josh so much is incredibly important to him, and his drive to help build the next generation of Hoosier fans is his ultimate passion. 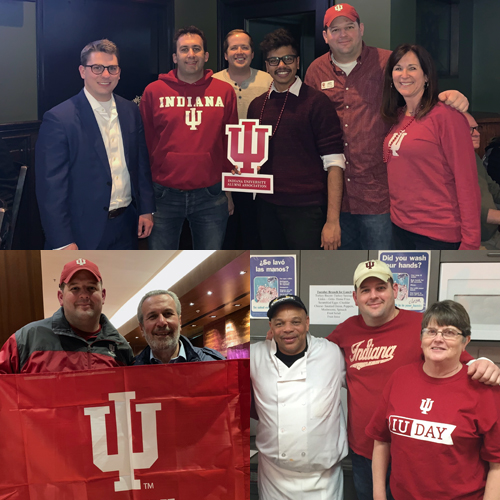 Jason's relationship with Indiana University started when he was nine years old, and two years later when the Hoosiers won the 1987 NCAA men's basketball title, there was no chance of him going to college anywhere else.

While in Bloomington, he took Bob Knight's Coaching of Basketball class, which lead to a position as a student-assistant in the Athletic Media Relations office. He graduated in December 1997 from the School of Public Health with a degree in sport communication-broadcasting.

The Bluffton, Ind., native spent more than a decade in professional and collegiate athletics before joining the IT operations team at Harvard Business School in 2010.

Though he lives nearly 1,000 miles from campus, his love for IU is stronger than ever. Since graduating, he has been an alumni student recruiter for the admissions office. For more than 14 years, he served as the secretary and president of the Boston Chapter of the IU Alumni Association. He's currently a certified alumni volunteer for the Northeast Region, and he’ll begin his second stint on the IUAA Executive Council in the summer of 2022.

Philanthropy has been a theme of his association with IU. After receiving generous financial aid as a student, Jason guided the creation of the Boston Alumni Scholarship and led the successful effort to fund the scholarship in perpetuity. In addition to being a life member of the IUAA, he’s also a member of the Well House Society, the 1820 Society, and the 1854 Society. 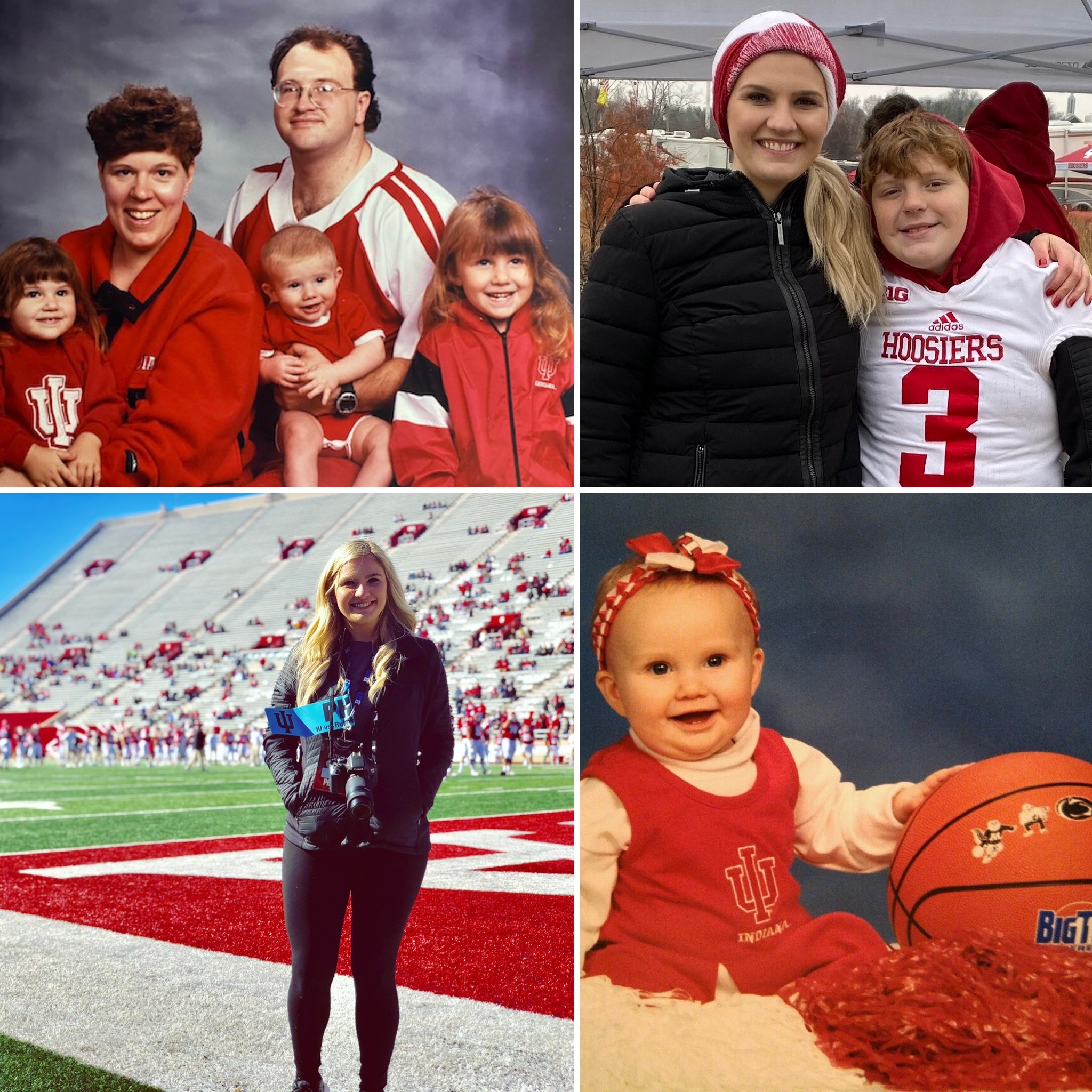 Amanda is a freelance sports photographer and writer who has been following Indiana athletics since childhood.

Some of her earliest memories include chanting "AJ Moye" and watching Tom Coverdale sling 3-pointers at Simon Skjodt Assembly Hall.

A nurse by profession, Amanda has contributed as an editor, writer and photographer covering IU basketball and football for a variety of media outlets since 2017.

Her professional work and personal involvement with Indiana athletics have given her a host of unforgettable memories, from interviewing former and current players to meeting the first IU men’s basketball coach of her lifetime, Bob Knight.

Amanda's purpose with Hoosier Ticket Project is to enrich the lives of other children and families by providing the type of cherished experiences at Assembly Hall and Memorial Stadium that have been such an indelible part of her life.

Thank you to our generous donors